Shortwave radio broadcasting has a long history dating back almost a hundred years. In many parts of the world, shortwave radio is still an important means of receiving information. Only the other week, the BBC announced they would resume shortwave broadcasts in Europe to provide news and information in Russian & Ukrainian where infrastructure has been damaged, or information is otherwise censored. 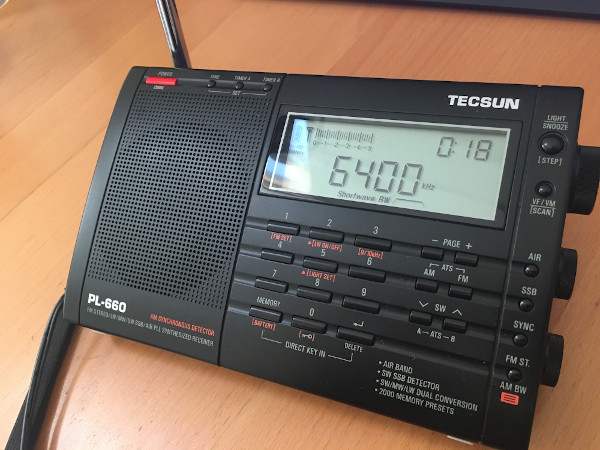 The prevalence of other technologies (such as TV or the Internet) means that it plays a less critical role nowadays in areas such as Western Europe and North America. Here, listenership is a fraction of what it used to be decades ago. That being said, for myself and other listeners in these regions, shortwave listening can still inform and entertain. Besides exploring diverse programming from different countries, there is also interest in the technological aspects related to receiving distant signals.

Shortwave (SW) radio occupies the frequency band 3-30MHz. Transmissions in this frequency range have properties that allow them to propagate over a long distance. Radio signals reflect and bounce between the earth surface and ionosphere in the atmosphere allowing them to travel much further than by line-of-sight alone. The nature of the propagation varies with the time of day as well as solar activity. In Western Europe, higher frequencies typically propagate further in the day, and lower frequencies at night.

These signals can be received from quite a distance too without any specialist equipment. Unlike FM radio, SW broadcasters frequently switch between different frequencies in order to give best reception in targeted regions. Frequency allocations are coordinated by the International Telecommunication Union (ITU). More listener-friendly program information is available from the broadcasters themselves (for example, BBC), or collated on websites such as shortwaveschedule.com, or short-wave.info.

Many of the international transmissions are from state broadcasters. They frequently broadcast in different languages (even Espernato!) to reach their audiences. Some of the different forms of programming includes news and current affairs, music, religious programming and language education.

Nowadays, the broadcasts are frequently also available online. For example, simultaneously steamed via the internet, or the content available in the form of podcasts. Despite the prevalence of the Internet in many places, a presence on the airwaves in different countries is still seen as a fruitful means for countries to reach audiences beyond their borders and spread their messages.

One of the largest international broadcasters is the BBC World Service. In 2007, it was estimated that 107 million people listened to the BBC World Service on shortwave, with 59 million in the Asia/Pacific region and a further 45 million in Africa and the Middle East. Shortwave radio is a lifeline in areas lacking access to other forms of communication, such as TV or the Internet. Besides continuing to provide news and information to communities, international and domestic broadcasters help also to fulfill a humanitarian function in making education accessible, providing public health information, and informing people in times of disaster.

As transmitters can be located outside a target country, broadcasts are not dependent on a country’s infrastructure. This makes it somewhat less vulnerable to state censorship, when compared to the internet. That being said, censorship still occurs through radio jamming – deliberately broadcasting noise, music, or other signals to disrupt a signal for listeners within a territory.

Beyond sitting down and tuning in, shortwave listening (SWLing) can become a hobby in a number of ways. For example, the pursuit of more distant signals and stations. For this, it can be interesting to explore more sophisticated receiver setups – for example, different radios and antennas. There are blogs and communities dedicated to this, including SWLing.com. Shortwave is also closely associated with amateur/ham radio. Large broadcasters share the airwaves with these amateur radio operators who use shortwave frequencies to make contacts across greater distances.

Listening to shortwave radio doesn’t require any special skills or complicated equipment besides an inexpensive radio receiver. In my part of the world, boundless information and entertainment is openly accessible online. That being said, there’s still something pleasing about scanning the airwaves at night, stumbling upon music from hundreds of kilometers away or trying to decipher conversations in unknown languages. It’s enlightening to hear new stories about people’s lives far from your own, or hear perspectives on familiar issues from an alternate viewpoint. In this sense, shortwave radio still remains a gateway to the world as any other technology.